We are very happy to present you our newest GABY family members! 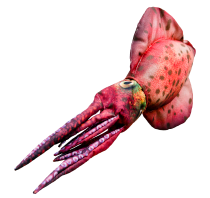 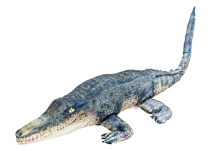 The Murray Cod is a large member of the Percichthyidae family. Despite its name, is not closely related to the cod. It is an emblematic Australian fish and widely recognized around the world as a top predatory fish, feeding on other fish, crustaceans and invertebrates. While it is a commercially important species, it is vulnerable to changes in its environment and requires conservation.

The southern calamari or southern reef squid (Sepioteuthis austalis) is a popular member of the Loliginidae family (the pencil squids). It can be found in coastal waters up to some 10 meters in depth in sandy or grassy areas of the subtropical Indo-Pacific region. As its cousines, the cuttlefish and octopuses, and other squids, the southern calamari is an excellent predator and can change its color.

The saltwater crocodile is perhaps the most recognizable of the 24 species of crocodilli-ans living today(crocodiles,alligators and Gavialidae). As its name suggests, ''salties'' can be found in salwater, but are more likely to be found living in rivers, deltas, estuaries and lagoons. Growing to some 6m in lenght, it is an absolute apex predator with no true dangers aside from humans. It feeds on a variety of land and water animals including fish, reptiles, mammals, birds and even sharks.

The Australasian snapper (recently named Chrysophrys auratus) is a popular member of the Sparidae family (the porgies) widely found in coastal and reef waters of Australia, the Philippines, Indonesia, mainland China, Taiwan, Japan and New Zealand. It can live up to 40 years and feeds mainly on shellfish, invertebrates and fish. It is not a true “snapper” (Lutjanidae family). A highly prized fish by fisherman, it is also a very tasty treat for chefs around the world.

The narrow-barred Spanish mackerel (Scomberomorus commerson) is a large member of the mackerel family. It is widely found around Australia, the Indian Ocean and Southeast Asian waters. It is an important commercial fish in many regions due to its expansive distribution and its sheer size, growing to around 2 meters in length. It is a voracious predator, feeding mainly on fish, squid and shrimp and is highly prized by fisherman and chefs around the world.

The Flathead (Platycephalus fuscus), or dusky flathead, is the largest member of the Platycephalidae family. The species can be found in estuaries as well as inlets and shallow inshore bays. It is a narrow and long fish and can grow to more than a meter in lenght, weighing more than 12kg, though most specimens around 50 cm. It is highly prized by fisherman and chefs for its delicious taste.

The coral trout (Plectropomus Leopardus), or leopard coral grouper, is a beautifully colored member of the Serranidae family. It can be found near coastal reefs from 3-100 meters in depth in waters of the Western Pacific from Japan to Austalia as well as Malaysia and the east coast of Thailand. It is a large and formidable predator, growing to some 120cm and feeding on fish and crustaceans. It is widely appreciated by sportfisherman and the commercial fishing industry.

The eel is a mysterious and secretive fish, inhabiting both freshwater and coastal areas of Europe. Juveniles spend their time in freshwater and as they mature, migrate to the Sargasso Sea to mate. Eel larvae are then carried by sea currents towards European shores where they enter river systems and start the cycle over again. They are a predatory and carnivorous benthic fish, living on the bottom of bodies of water and feeding either on living or dead prey. Due to pollution and overfishing, eel populations are under heavy pressure and require conservation efforts in many countries.